All the flavors you love in a loaded baked potato are found in this easy, thick and creamy soup! Loaded Baked Potato Soup is made with leftover or make-ahead baked potatoes, crispy bacon, melted Cheddar cheese, tangy sour cream and green onions or chives....yum! This is truly the best potato soup recipe I've ever tasted.

This game day recipe is also my go-to soup recipe for the fall season because I can make in stages ahead of time or all at once. It makes plenty for a game-day crowd, plus it freezes well if I happen to have any leftovers. That doesn't happen very often.

Tip: If you do choose to stir in the Hormel bacon crumbles, I like to crisp them up in the microwave first. Place them on a paper towel. Microwave on HIGH for 30 seconds or until slightly crisp.

Ingredient amounts and detailed descriptions are in the printable recipe below.

How to make this easy potato soup

Detailed directions are in printable recipe below.

Hint: Don't throw out those potato skins! My friend, Stacey Little, over at SouthernBite.com has this yummy recipe for Pulled Pork Potato Skins I'm dying to try!

Hint: The soup will thicken even more overnight. To thin it out, just add a little bit of milk or broth when reheating it.

Can I bake the potatoes in the air fryer?

Yes, I bake them all the time in the air fryer when I make my Air Fryer Baked Potatoes with BBQ Pulled Pork.

Preheat your air fryer to 375F degrees for 3 minutes. My ROAST setting is 375F.

Wash and dry the potatoes. With a the tines of a fork, poke holes evenly all over the potatoes about 1/8-inch deep. About six times is plenty.

Rub about 1 teaspoon olive oil or your favorite oil all over each potato. Carefully place them in the air fryer. Cook them at 375F on ROAST or AIR FRY for about 35 minutes, depending on the size of you potatoes.

Carefully remove the potatoes with tongs onto a cutting board. Let them stand at room temperature for about 10 minutes.

Other easy soup recipes you will love 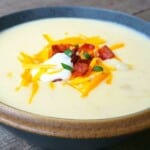 Tip: Potatoes can be baked up to 2 days ahead of time and stored, covered, in the refrigerator. Baking potatoes such as Russet and Idaho are best but waxy potatoes such as Red or Yukon Gold can be used. To add flavor or use up ingredients in your fridge, you can replace up to 2 additional cups of the milk with more chicken, so, half milk and half broth. It will not be as creamy but still delicious.  How to avoid lumpy gravy or white sauce:

Serving: 1cup | Calories: 284kcal
Did you make this recipe?If you love it, share it! Tag me on Instagram @gritsandgouda using #gritsandgouda Comment below before you go!