Shortcut Shrimp and Grits has Gouda cheese stirred into quick yellow grits (never instant). No roux in this recipe so you'll have dinner on the table in a snap. Heading to the beach but like to cook in the condo? Having a staycation and want to feel like you are at the beach but not spend too much time in the kitchen? My shortcut version recipe is just the ticket! 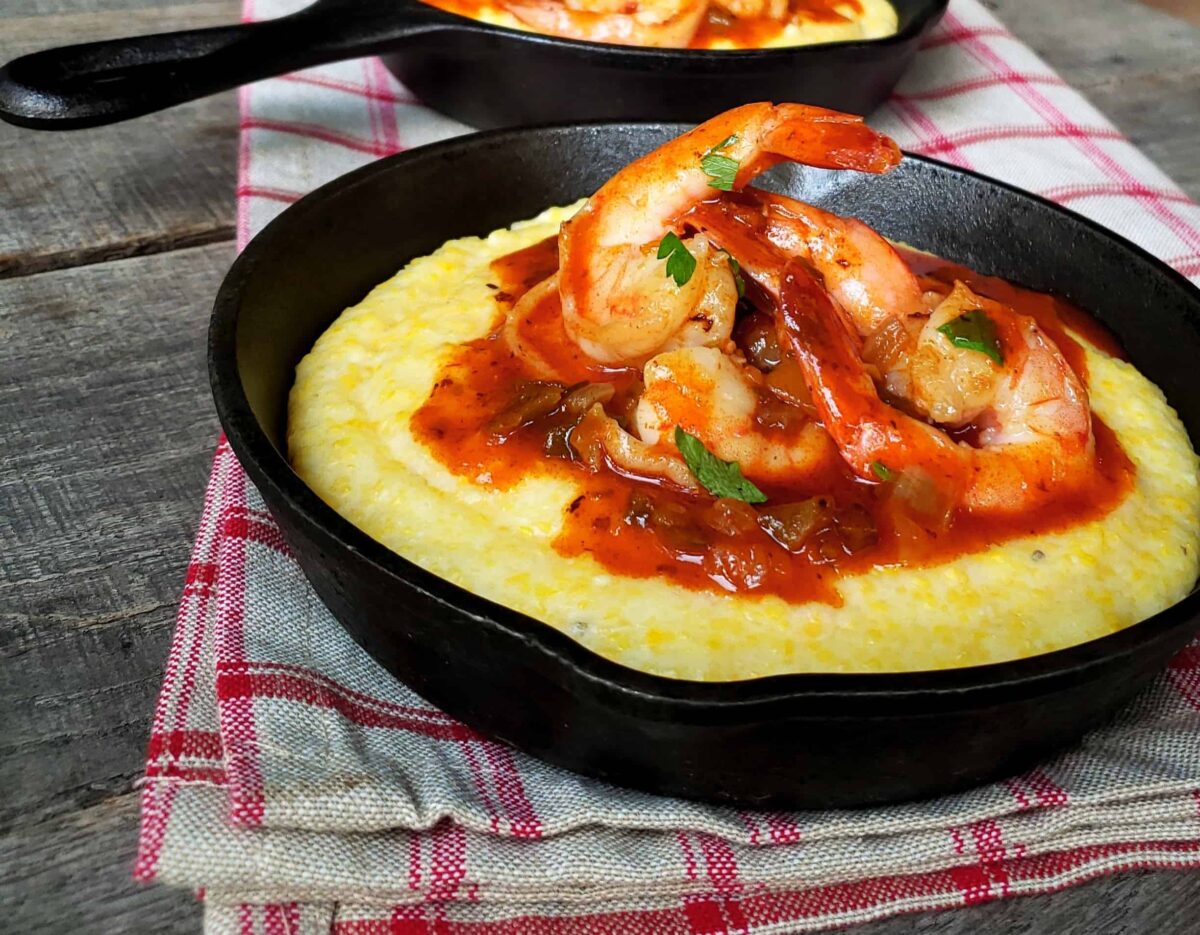 While this recipe may not be "low-calorie", it is certainly MUCH lower in calories and fat than any traditional shrimp and grits recipe that is laden with heavy cream, sausage and bacon.

What's the story behind this recipe?

My shrimp and grits story includes the explanation for the name of my blog, Grits and Gouda. I named my food blog this because my recipes are Southern with shortcuts with a pinch of gourmet, thus the name Grits (Southern) and Gouda (gourmet cheese).

There's actually a story behind any shrimp and grits recipe. Everyone adds their own twist to this popular seafood dish.

There are so many ingredients that can be added, omitted, or swapped for a similar one.

This recipe is a basic shrimp and grits recipe (except for Gouda cheese in the grits) with a shortcut-no roux.

What thickens the shrimp and grits sauce?

I use tomato paste with no tomatoes for a simple and less chunky sauce, no cream so it highlights the bright red color of the sauce, and believe it or not, cornstarch to thicken it rather than flour or a roux. A slurry of cornstarch and water is a quick and easy way to thicken any thin sauce.

If you prefer a creamier sauce just stir in 1/4 cup whipping cream.

I know, that seems like a shrimp and grits transgression, but flour would give it a matte finish rather than the high gloss finish achieved with cornstarch.

I am all about SHORTCUTS and cornstarch thickens the sauce in seconds rather than a tedious roux that requires me to stand at the stove for a minimum of 30 minutes.

Don't get me wrong, I love, love, love a roux thickened, cream-infused shrimp and grits recipe and I will make it again soon and start with cooking Conecuh sausage and stirring in cream to finish it.

Remember, this is a shortcut recipe so I also used 5 minute regular yellow grits. White grits are fine but I love the contrast of the yellow against the reddish shrimp mixture. I also pretend it's cheesier if it's more yellow because you know we eat with our eyes, too.

I prefer the slightly chewy texture of stone ground grits (see below) and I'm partial to Alabama made McEwen & Sons but they take longer than quick grits. For this shortcut recipe, I used the Dixie Lily yellow corn grits-they are also packaged and sold in Alabama and grown in the United States.

The food stylist in me always leans toward the yellow grits rather than the white, but it's strictly a personal preference.

My least favorite grits (and I actually refuse to eat) are the "instant" grits that come in individual breakfast packets. They have been precooked and dehydrated so you can just add water. No thanks.

I'd rather make stone-ground grits the night before and stir in a little extra milk the next morning to loosen them up-or just whip up these 5 minute quick grits.

This may surprise you but I recently saw rice grits on a restaurant menu. I couldn't decide if I should be offended as a Southerner because don't we "own" that word?

It turns out rice that has been broken or fragmented in the milling process can also claim the name "grits". But, any true Southerner knows that "true grits" are made from corn. (See what I did there?)

For a complete breakdown of the different kinds of corn grits, here's a link from my friends over at Southern Living.

What cheese can I stir into my grits?

Cheese! Glorious cheese! Almost any hard or semi-hard shredded cheese can be stirred into grits. My favorite is, of course, Gouda cheese, but other common cheeses are Fontina, Cheddar, Montery Jack, and Gruyere.

I'd love to hear from you and see pictures of your version of Shrimp and Grits or if you make my shortcut recipe of Shrimp and Gouda Grits. If you don't have Gouda cheese, then Cheddar, Parmesan, Gruyere and Asiago cheese are flavorful substitutes. 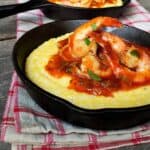 This is a shortcut recipe for shrimp and grits thickened with cornstarch instead of a roux and using quick-cooking grits. There are many options to add or change like sprinkling with green onions, using stone-ground grits that take at least 25 minutes to cook, and cooking the vegetables in Andouille or smoked sausage drippings and adding the sausage.
Prep Time10 mins
Cook Time15 mins
Total Time25 mins
Course: Main Course
Servings: 4 servings
Calories: 462kcal
Author: Kathleen Phillips | GritsAndGouda.com
Cost: 11
Prevent your screen from going dark

Note: Be sure to remove the shrimp tails before eating.  Other cheese options include Cheddar, Asiago, and Gruyere. 1/2 cup of whipping cream can be added with the remaining chicken broth if you prefer a creamy sauce. If you prefer to add smoked sausage, you can cook one pound of sliced sausage first, then omit the butter and oil and cook onion and pepper in the sausage drippings.

Serving: 1fourth | Calories: 462kcal
Did you make this recipe?If you love it, share it! Tag me on Instagram @gritsandgouda using #gritsandgouda Comment below before you go!